AUEB's Rector Professor Konstantine Gatsios participated in the EUA's Council meeting on January 25th, 2013 which took place in Istanbul, as a representative of the Greek Rectors' Synod.

The European University Association (EUA) represents and supports higher education institutions in 47 countries, providing them with a unique forum to cooperate and keep abreast of the latest trends in higher education and research policies. Members of the association are European universities involved in teaching and research, national associations of rectors and other organizations active in the fields mentioned above. EUA is the result of a merger between the Association of European Universities (CRE) and the Confederation of European Union Rectors' Conferences, which took place in Salamanca, Spain, on 31 March 2001.

Among the topics discussed at the Council were:

After EUA's announcement of nominations for the position of 3 members of the nine-members of the Board of Directors (due to end of term), Professor Konstantine Gatsios as Rector of AUEB, 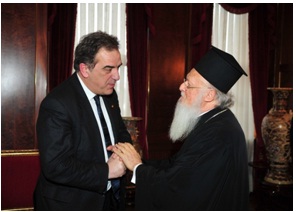 submitted his nomination for the Board of EUA, which was unanimously accepted by the Chairman and the members of the EUA's Nomination Committee. This is the first time that a Rector from a Greek University is short listed for a place in the Council. The elections for the 3 new board members will be held during the EUA's General Assembly, which will take place on April 12, 2013 at the University of Ghent, Belgium.

Apart from the working process of EUA's Council, Professor Konstantine Gatsios had the opportunity to meet and discuss matters of common interest with his All Holiness, Bartholomew, Archbishop of Constantinople, New Rome and Ecumenical Patriarch. His All Holiness, Bartholomew, who also holds an AUEB's Honorary Doctorate, wished Professor Gatsios all the best for his nomination.

Certificate of Achievement Award to George Alogoskoufis, Professor of Economics, at AUEB’s Department of Economics
END_OF_DOCUMENT_TOKEN_TO_BE_REPLACED