In 2020 the Athens University of Economics and Business turned 100!

To commemorate this centenary the University planned and carried out a series of events in late 2019 and early 2020. Amongst others, festive activitites activities included: 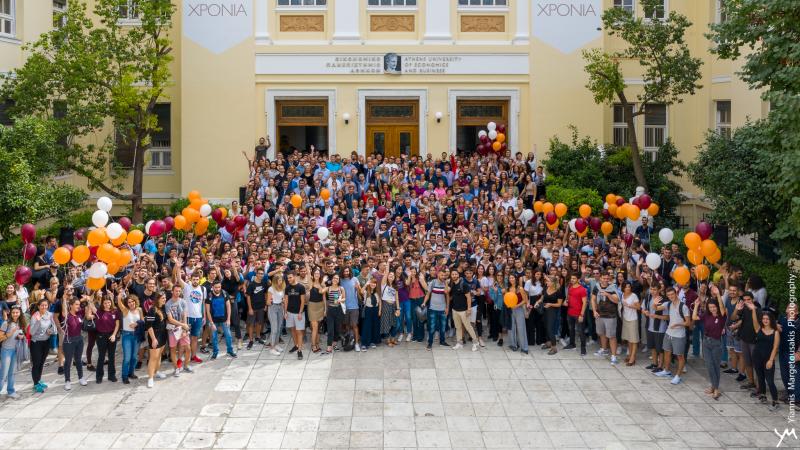 It is the oldest university in Greece in the fields of Economics and Business, its roots tracing to the establishment of a Merchant Academy in Athens. Up to 1955 the School offered only one degree in the general area of economics and commerce. In 1955 the duration of study at the School is increased from three to four years and two cycles of study leading to two separate degrees: one in economics and the other in business administration. In 1984 the School was divided into three departments, namely the Department of Economics, the Department of Business Administration and the Department of Statistics and Business Informatics, the latter renamed to the Informatics Department in 1995. In 1978 the University puts in operation the first Master's program in Greece, the MSc in Economics, still in operation and highly regarded today. In 1989, the University expanded to six departments. From 1999 onwards, the University developed even further and nowadays it includes eight academic departments, offering eight undergraduate degrees, 29 Master's degrees and an equivalent number of doctoral programs

01
02, 2023
Reaccreditation of the MBA International and the Executive MBA by AMBA - The Association of MBAs
26
01, 2023
The Department of Accounting and Finance, AUEB and the ACCA invite you to the conference they co-organize on Tuesday, March 7 at 9:00 am. in the Antoniadou Amphitheater at AUEB.
26
01, 2023
"Understanding history through photo collections in a digital age - the challenges of Holocaust Archives in the future", Jonathan Matthews, Head, Yad Vashem Photo Archive, 26.1.23, 16:00
19
01, 2023
Columbia University and the Athens University of Economics and Business are exploring possibilities for cooperation
19
01, 2023
AUEB hosted faculty and students from the University of Illinois at Urbana Champaign
11
01, 2023
Joint Ph.D. (Cotutelle de Thèse) between the University of Lausanne and the Athens University of Economics and Business: “Statistics and Forensic Science” Department of Statistics, AUEB School of Criminal Justice, University of Lausanne